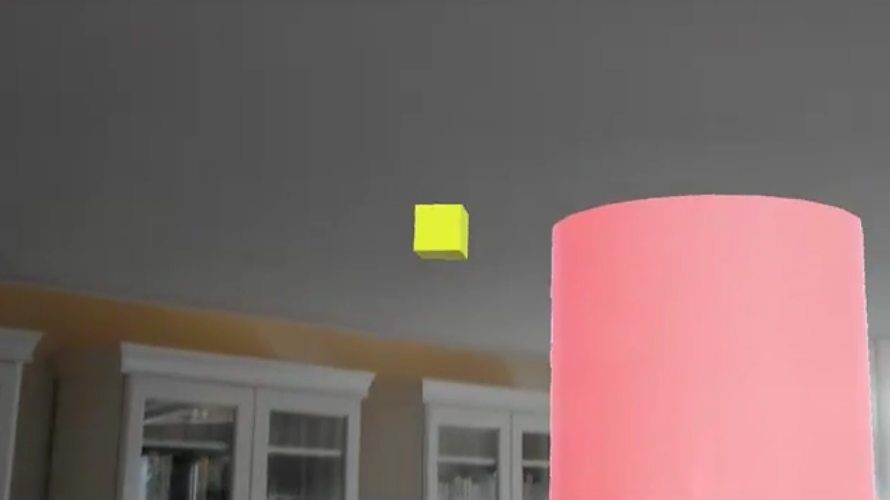 The gaze is one of the different forms of input, but also one of the most important ones, used with a HoloLens. The gaze is used for targeting holographic objects and your environment. The gaze helps you as developer to determine where the user is looking at and it allows you to predict what his/her attentions are. The position and orientation of the head is used to determine where the gaze is pointing at. The gaze is presented as a holographic object itself. You can use any type of visual gaze as you wish allowing you to create some nifty gaze cursors.

The purpose of this post is to explain how you implement a gaze which interacts with the physical environment around you. It expects that you have a project setup with Unity containing at least one scene containing a Main Camera and Directional Light. I will be using the default project setup I described in an earlier post.

As already mentioned you can use anything for a gaze. For now, we will keep things simple and use the 3D cube object you can create with Unity.

We will create a prefab for the gaze containing a 3D object, material to style the 3D object and code to handle the gaze. The prefab is actually a package containing everything needed to place a gaze cursor in your scene. Changes made in the prefab will reflect into the objects based on that prefab in your scene. Kind of inheritance with C#

At this moment, we have a GazeCursor containing no code. But before we are going to add code we need an additional prefab for the spatial mapping of the environment.

The class is by default derived from MonoBehaviour. It contains two methods called Awake() and Start(). These methods are called from Unity when the objects are instantiated. As you can see we initialize and configure the collider. Most of these configurations can also be set in Unity through the Inspector view. But in our case, we need the physical layer to define the PhysicsRaycastMask which is used in the code for the Gaze Cursor.

The gaze cursor script handles the routine to check if the gaze cursor hits the physical environment defined by the HoloLens. We will be adding a C# script to the GazeCursor prefab.

The script is similar as the code from the Microsoft examples of HoloLens. The difference is that we now extended the call of the Physics.Raycast method with an additional parameter. The method gets the PhysicsRaycastMask of the SpatialMapping class we created earlier. This allows us to identify if we hit the collider defined in the SpatialMapping prefab, hence hitting the physical environment.

We have created a Gaze Cursor and Spatial Mapping for our scene. To use the objects, we need to add them both to your active scene. Drag both prefabs into the Hierarchy view as a child into that scene.

And that’s all the work we had to do. Let’s see how it runs in the HoloLens. Build your application and let Unity create the Visual Studio solution. Open the solution and run the application on your HoloLens device. The result should be like the movie below.

Keep in mind that it will take a little bit of time for the Spatial Mapping Collider before it has mapped the environment. Therefor the Gaze Cursor will not appear until it is ready. In my case it takes approximately 4-5 seconds.